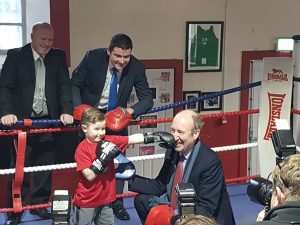 Minister of State at the Department of Transport, Tourism and Sport with special responsibility for Tourism and Sport Brendan Griffin and Boxer Michael Carruth look on as one of the younger members of Arbour Hill Boxing Club takes a shot at Minister for Transport, Tourism and Sport Shane Ross.  Minister Ross was at the Club this morning to make his announcement regarding the allocations of the Sports Capital Grant Programme 2017.  Arbour Hill Boxing Club are delighted to be among the recipients.  FDA were appointed Civil and Structural Consulting Engineers for the refurbishment of the Club in 2015 and our involvement in the project is ongoing.  Great to see such a worthwhile community project getting the recognition and support it deserves.

This website uses cookies to improve your experience while you navigate through the website. Out of these, the cookies that are categorized as necessary are stored on your browser as they are essential for the working of basic functionalities of the website. We also use third-party cookies that help us analyze and understand how you use this website. These cookies will be stored in your browser only with your consent. You also have the option to opt-out of these cookies. But opting out of some of these cookies may affect your browsing experience.
Necessary Always Enabled

Any cookies that may not be particularly necessary for the website to function and is used specifically to collect user personal data via analytics, ads, other embedded contents are termed as non-necessary cookies. It is mandatory to procure user consent prior to running these cookies on your website.